These last few weeks I have been working on a new mask/rondo of the face of Robin Goodfellow,  also know as Puck  (by Shakespeare in The Midsummers Nights Dream).   He is the Classic British Hobgoblin. I played him as a small boy and have felt a connection ever since. The design for this happened all very quickly, woke up one morning and sjust started, as if I was waiting for this moment for the sculpt to come. Not a lot of thought though aware that some sort of thinking has been smouldering away for decades. A few drawings and a mini version happened in a few days. 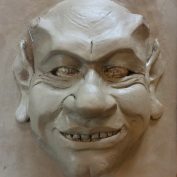